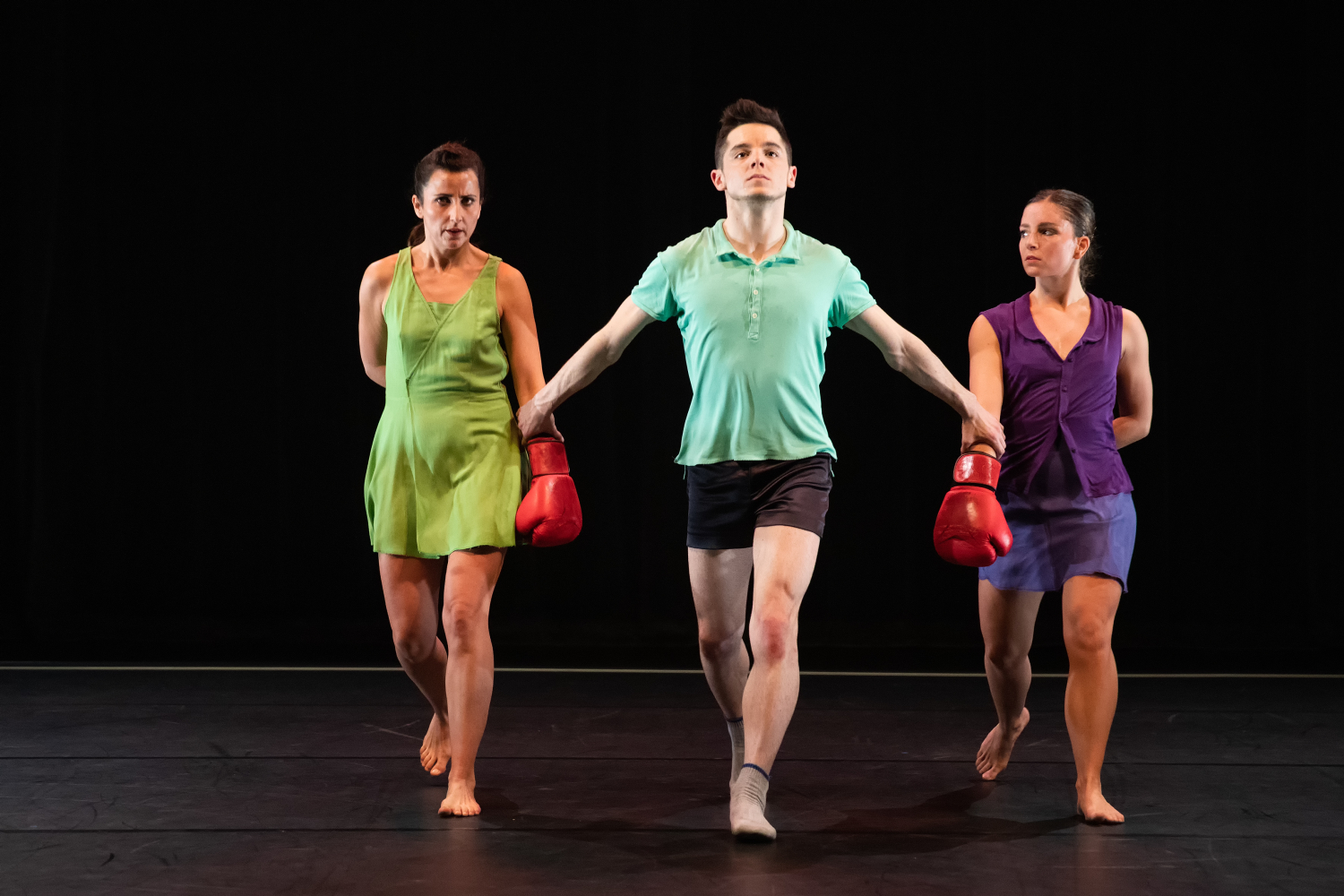 Creating proximity: from values and art practices to engagment with audiences

Creating proximity with local neighbourhoods, fostering social bonds – what a challenge for dance houses in the times when stakeholders step back from their promises, and when social disparities keep growing across Europe. And what a matter for discussion.

This Atelier, hosted by KLAP Maison pour la Danse in Marseille, was not destined to result in a DIY tutorial, nor to come up with a ready-made solution, rather it has explored the different challenges and questionings dance houses face in their local contexts.

Is creating proximity an ideal, a burden or a new art form?

What values are shared via contemporary dance? How can strategies of creating proximity be articulated through both art practices and engagement with one’s audiences? How to create trust whilst resisting gentrification? How to share theatre space with local communities? And how do you let the specificity of your local context influence the sharing of experiences? Because a soon-to-be-built dance hub in a hip Helsinki district, and KLAP Marseille, set in one of the poorest French neighbourhoods, are unlikely to follow the same path in fostering proximity. And, finally, is creating proximity an ideal, a burden or a new art form?

From a communication perspective to funders' requirements: community building is a charged term that needs to be contextualized.

What is it, a community? Who forms it, and what makes us think that everyone in a community has the same agencies and adopts the same spectatorial attitude, however homogenous these communities might be? It is of utmost importance to learn to know its members on a personal level, build a common language and develop common practices, rather than merely structure theatres’ community work around generalizations and assumptions.

Here, the first challenge appears: communication teams consider it easier to work with smaller groups in order to build personal relationships, but, on the other hand, the danger of artificially segmenting the audiences peeps around the corner. This split is encouraged by the funding bodies’ requirements and in the long run may reinforce the divisions running across societies.

But then, is it our task to create a universal community, or is it rather to empower minority groups without melting them in the theatre-goers majority pot? Or is it none of the above after all?

Community and proximity in contemporary dance

Commitment may be the key concept to answer to the above question. The example of B-Motion Festival in Bassano del Grappa shows that when applied in the long run and with lots of patience and passion, engagement efforts drive to inspiring outcomes. Since 2013 Dance Well, a community of locals living with Parkinson’s disease has developed into an ever-growing group of Dance Well dancers, with which many dance makers have been asked to work to fascinating result.

If one accepts that this work is not about project management but about building human relationships, with all its up and downs and its particular timing, then it results in proximity and not gentrification and exclusion, in which some season-long audience engagement projects end up.

Even more so, it has established a 200-strong group of friends and dance ambassadors, impacting their peers and communities. Other initiatives include a community of local shopkeepers, who have become allies and ambassadors of the festival and have devised performances in their shop windows. If one accepts that this work is not about project management but about building human relationships, with all its up and downs and its particular timing, then it results in proximity and not gentrification and exclusion, in which some season-long audience engagement projects end up.

Contemporary dance has potentially much to offer as an art form here. But for it to become reality, dance makers and producers need to accept that this meticulous “relationship” work can also enrich the art form and practice they are working with, rather than remain its side effect or a burden.

Complexity of engaging with a diverse audience: collective sharing of space(s).

In times when dance houses are continuously being charged with the task of creating social hubs, and not only for dance, the question of sharing spaces becomes crucial. A dance house is a house, thus a space. How to share a space with someone new without knowing them? But frequently dance houses are faced with the need to negotiate their space rather than share it with local communities. An intricate contractual relationship comes into play, social and class differences oppose security concerns; administrative struggles, risk of gentrification and of patronizing all loom around the corner. This is what drives many dance houses to negotiate rather than share their spaces. But could there be an alternative way, of sharing rather than negotiating?

Smaller initiatives coming from local dance companies and associations might be helpful. Grassroot campaigns like walking down the high street, meeting shopkeepers and sharing a coffee with local bartenders, spreading the word, engaging in social initiatives, however far from the art scene they might seem at a first glance, can bring palpable results and may grow into something way bigger. The Friche Belle De Mai, a former tobacco manufactory, has developed into a sprawling creative hub, hosting a theatre, many exhibitions and atelier spaces, but also offices for local associations, community projects and a nursery. To top it all, a huge rooftop terrace overlooking Marseille serving as an open-air concert ground, and a project of a public school. Here, the theatre does not greet you with an intimidating facade but with a sports ground and a skate park for local youth. Here, the space is shared in collectiveness. 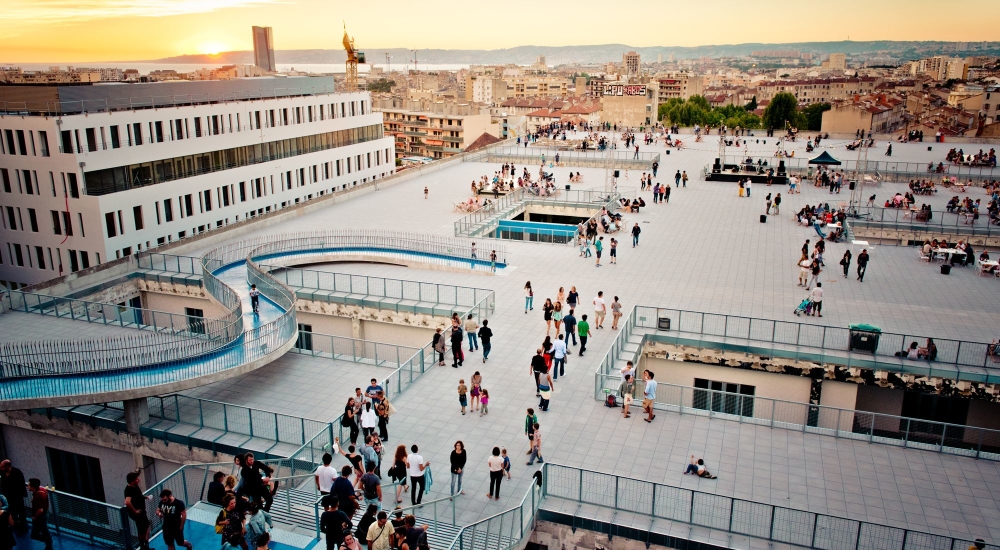 Here, the theatre does not greet you with an intimidating facade but with a sports ground and a skate park for local youth. Here, the space is shared in collectiveness.

Despite all these great ventures, the reality remains different. The white middle-class crowd attending evening shows at KLAP and Friche Belle De Mai is miles away from the neighbourhood in which both are installed. Faced with security risks, some theatres in the area close their gates during the day. Others rent shuttle buses to get their audience back home safe after a late show. And their sole presence amid poverty and precarity risks fostering gentrification, the common evil of European cities.

What is our responsibility here? Making a social change or highlighting that such change is possible?

How can a dance house create proximity while complying with the stakeholders’ requirements, how can it engage in social work, long abandoned by the public authorities in many countries, without disregarding art promotion? Relevant questions for the whole cultural infrastructure to ask, for which we still haven’t found structural answers. Finally, what is our responsibility here? Making a social change or highlighting that such change is possible?

Evgeny Borisenko (b. 1987) is a Berlin-based human rights lawyer and dance/theatre critic. He has been a freelance reporter for the Russian « Театр. » theatre magazine and lawyer with the Council of Europe. He has become an avid spectator of contemporary dance and theatre in France and all around Europe and has understood he could do more than watching. Recently moved to Berlin, he is currently working on his first theatre play and researching into the issues of hauntology, spectatorship and assembly politics in contemporary dance and performance.