The Relevance of Dance

The DanceHouses
The Relevance of Dance
The Dance sector in Europe
Writing the history
An utopia?
Pushing boundaries
Reports of the Atelier in Bassano
Interviews and guided tours
Collaborations
A greek perspective
Breathing space
New audiences
Culture in Sustainable Development
Catalogue of best practices
Collective questions
Dance and Wellbeing
Greek laboratory
A Hundred
Dance production and Funding
Slovene perspective
Analysis of the sector

Jordi Pascual, coordinator of the Committee on Culture of United Cities and Local Governments (UCLG), also known as “Agenda 21 for culture network”, offered the opening lecture of the EDN conference How to make dance relevant? Examples and practices.

During his lecture, Jordi talked about 3 groups of ideas of what respond to the role of culture in sustainable development.

The current paradigm of sustainable development

The triangle of the sustainable development: in the 18th century the economic viability was used to explain growth in terms of production; at the end of the 19th century the social equity was included to this discourse; in the last years of the 20th century, the environmental integrity was added.

When applied to the real world, this triangle is not able to explain who we are as people, the choices that we make, the history, the diversity of the world nowadays. 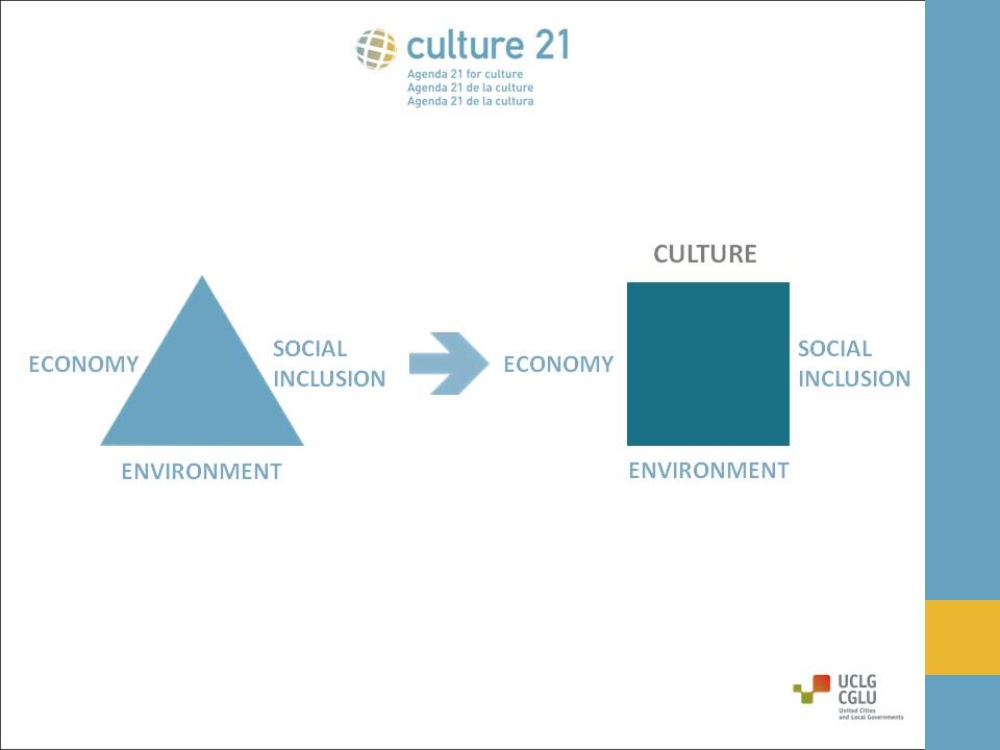 The idea of including culture as the 4th pillar or dimension of sustainable development appeared as a simultaneous interest in different contexts:

One of the main reasons why culture is a pillar of sustainable development is the operational one. It empowers us, cultural and artistic actors: it offers the best “lever” to be key actors in societies. Another reason is more conceptual: culture is about the freedom of choice of the future generations. The next generations need our tools, our ideas. The best way to bring these capacities to the nations and cities is that cultural players have a space on the table of public decision as equals.

In September 2000, the United Nations’ General Assembly approved a global partnership to reduce poverty that is known as the Millennium Development Goals (MDGs). Culture was not mentioned in the 8 goals. Read here

The United Nations Conference on Sustainable Development that took place in Rio de Janeiro in 2012, known as Rio+20 had as a result the declaration The future we want focused on the environment protection. Read here (pdf)

The United Nations decided to merge both processs in a single agenda. After several consultations, in 2015 its General Assembly adopted the 2030 Agenda for Sustainable Development, including a set of 17 Sustainable Development Goals (SDGs) with 169 targets to end poverty, fight inequality and injustice, and tackle climate change by 2030. Read here 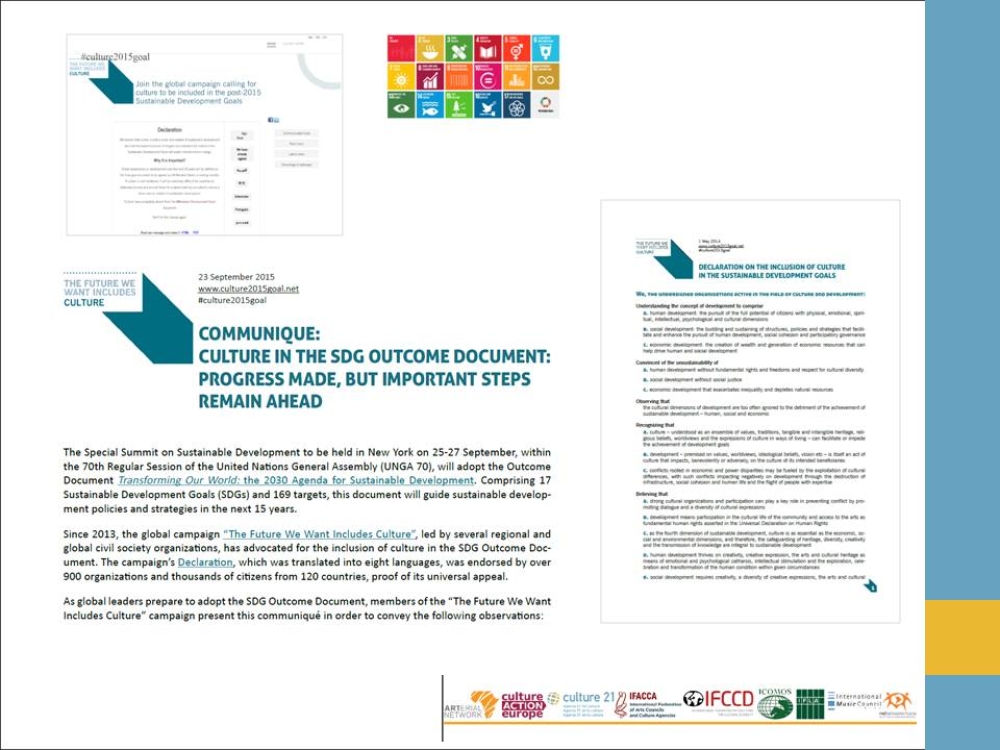 Agenda 21 for culture, in partnership with different international organisations, launched in 2013 a campaign calling for culture to be included in the post-2015 Sustainable Development Goals. The campaign, known as The future we want includes culture, also as the #culture2015goal campaign, published 4 extraordinary documents. Read here

The final document of this campaign titled Culture in the SDG Outcome Document: Progress made but important steps remain ahead is a good summary of the “achievements” because, yes, “culture” is mentioned in the preamble of the SDG, and in several of the targts, but only “half” a target is explicitly related to culture (this target is 11.4).

A lot of work needs to be done in the next years. Cultural actors (especially their European and global networks) must take the responsibility and should not wait for international organisations to “invite them” to be active. They (we) should self-organise. “Culture” has around 10 years to create an accountable constituency before a serious debate for the 2030 starts.

Agenda 21 for culture is the founding document and global action plan (2004) of the Committee on culture of the world association of  United Cities and Local Governments (UCLG), the global platform for cities, organizations and networks to learn, to cooperate and to launch policies and programmes on the role of culture in sustainable development. Read here

The committee of Agenda 21 for culture works to give elements to the local governments to better deliver cultural policies.

A new updated version of the agenda was approved in 2015 in Bilbao named Culture 21 Actions including an action plan based on 9 commitments and 100 actions for local governments to consider when designing the public policies. Read here 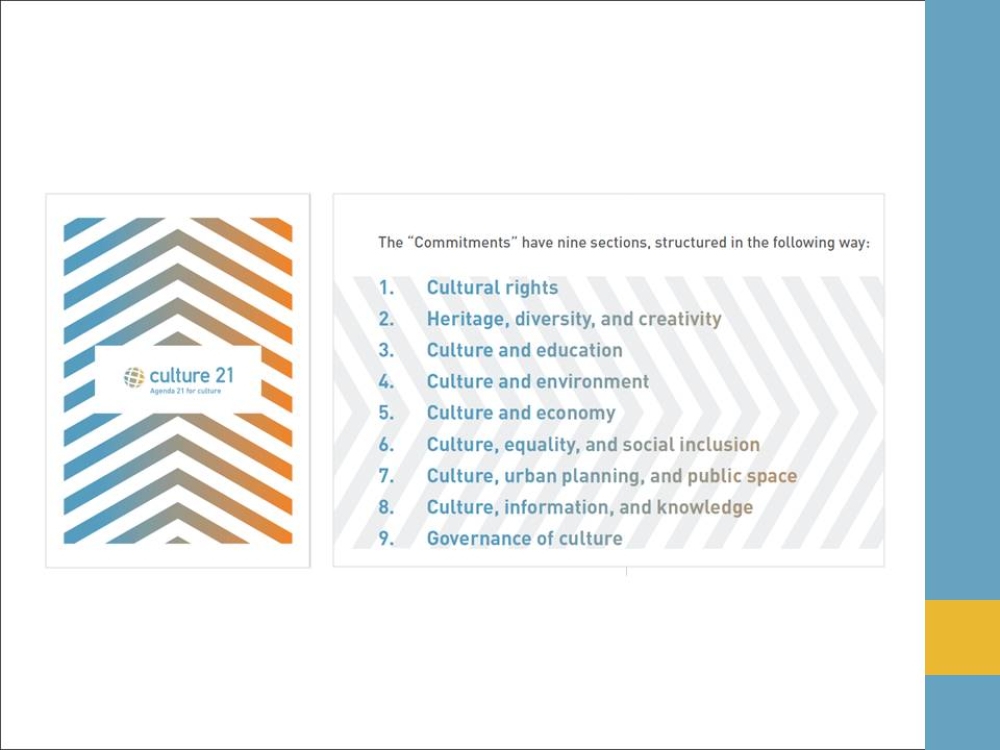 Jordi Pascual coordinates the process Agenda 21 for culture and the Committee on Culture of United Cities and Local Governments (UCLG). He teaches urban cultural policies and management at the Open University of Catalonia (UOC) and has previously worked for the Interarts Foundation and the Autonomous University of Barcelona. He often writes articles on cultural policies and local development and gives conferences on the role of culture in sustainable development. He has been a member of the jury of the European Capital of Culture for 2010, 2011, 2013 and 2016. His recent publications include Culture and Sustainable Development: Examples of institutional innovation and proposals for a new cultural policy profile (UCLG-UNESCO) and On Citizen Participation in Local Cultural Policy Development for European Cities (European Cultural Foundation).