EDN in collaboration with Kino Šiška organized the EDN Atelier on 20th and 21st November, linked to the November online edition of the International Festival of Contemporary Dance - CoFestival, organized by Kino Šiška and Nomad Dance Academy Slovenia. 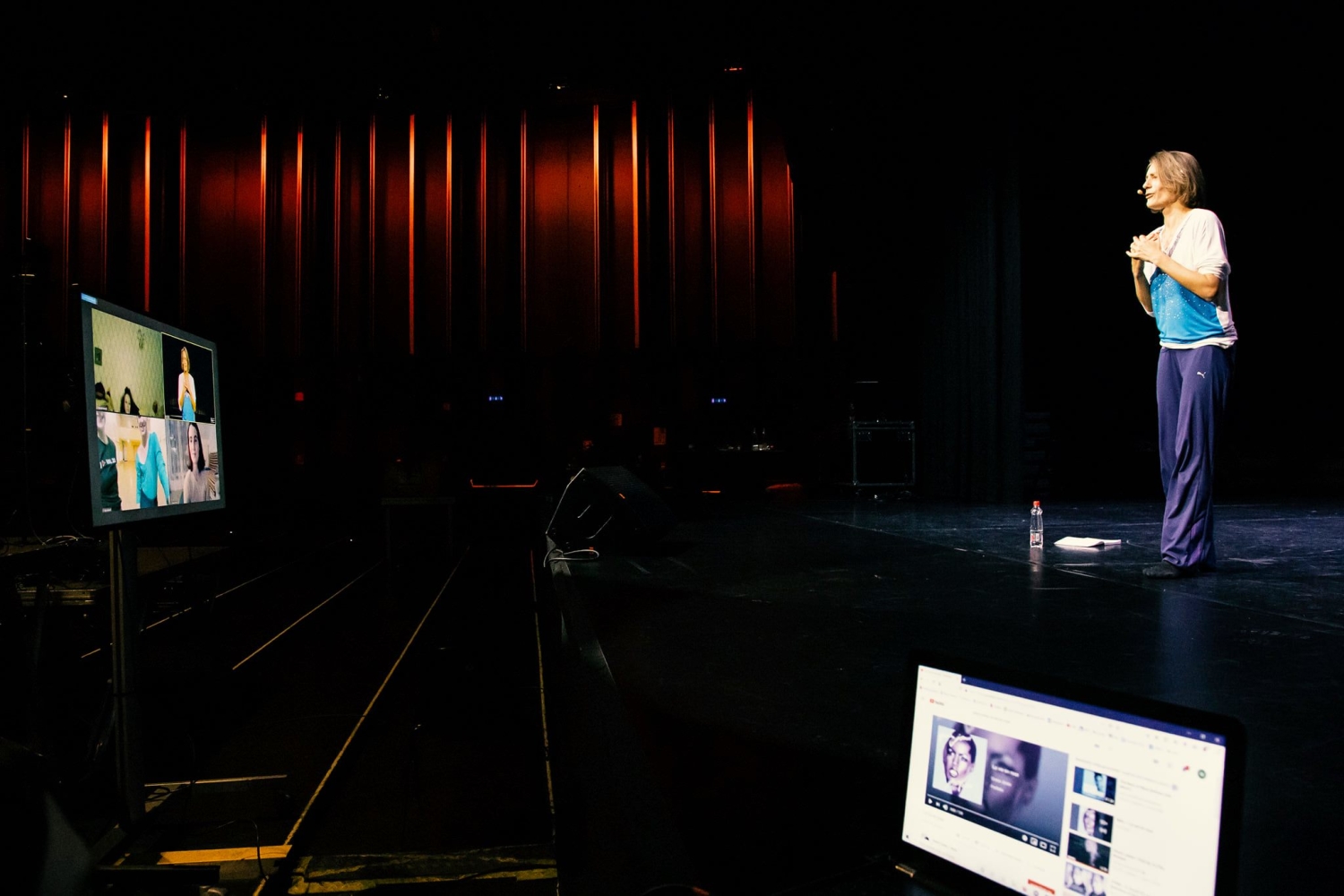 The two days online programme combined theory and practice, historical and contemporary examples and offers lectures, workshops and debates on the proposed topic. The EDN Atelier was recommended for dramaturges, artistic directors, programmers, curators and producers.

In the introductory lecture for the EDN Atelier ‘The Amplifier of Voices’, choreographer, performer and voice teacher Irena Z. Tomažin and dance historian and theorist Rok Vevar outlined some basic conceptual features and historical references that drew connections between dance, voice, and the body in 20th century contemporary dance.

The lecture began by describing how dancers’ subjectivity was silenced – how, in ballet, it was transformed into mute obedience in the face of the choreographer’s spoken instructions – and emphasised the problem of the dominant place of music in ballet and modern dance in the earlier 20th century. Tomažin and Vevar then went on to unpack the phenomenon of sub-vocalisation in the choreography of German Expressionist Dance (Ausdruckstanz), looking at the striking example of Valeska Gert’s daring, experimental voice performances in the Weimar Republic. From there, they moved on to look at different uses of voice and language in the context of American Postmodern Dance, where the voice has to be legitimised within a conceptual equation that encompasses expressive, representational and discursive material as well as the effects of sheer presence (Yvonne Rainer, Lucinda Childs, Trisha Brown). After touching on the neo-avant-garde theatre of the 1960s, where voice was used as a marker of spatial volume (Grotowski), the lecture finally arrived at the notion of voice in contemporary dance productions, where it is used, among other things, as a manifestation of the Real, of Lacan’s objet petit, or of the death drive (see: S. Freud, J. Lacan, M. Dolar, B. Kunst): something that seems to be more alive than life itself; the manifestation of the human beyond its subjectivity, or something that is perceived as divided from that subjectivity (have a look at performances by I. Dimchev or I. Tomažin).

The Atelier continued to build context with the contribution of Luka T. Zagoričnik, a music theorist from Ljubljana who gave a lecture titled ‘Counter-voicing in the avant-garde and experimental music’. Zagoričnik spoke – through multitudes of voices and utterances – of different voices and different strategies in experimental and avant-garde musical traditions, pop music, performance art, sound art, sound poetry, and multimedia art. In the process, he outlined the topic of voice in relation to sound, noise, silence, space, resonance, immersive experiences, subjectivity, body, image, and gender roles. In order to create useful distinctions and underline specificities, his lecture was divided into several chapters, including: Voice as Noise Between the Lines (exposing the idea and development of sound poetry); Captured Voice (looking at how the invention of recording technology and sound reproduction penetrated the musical field, transforming our auditory senses and still marking them to this day); Voice as Space of Resonance (outlining some unique approaches to sound that harness various sonic phenomena, observations from science and technology, and approaches in acoustics/psychoacoustics and behavioural studies, using the transmission of sound, vibration, frequencies in space, and different ways of hearing); Voice in Modern Composition Through Pop Culture (where the speaker outlined a few examples of works which furthered the deconstruction of voice in contemporary music, bringing together the tradition of opera, avant-garde music, experimental composition, visual art, pop art, and pop culture); Voice as Noise: Between Scream, Shriek and Whisper (looking at the most radical and extreme expression of the voice: the scream, the shriek, the sound of agony, pain, fear, the echo of torture, of violence and extreme internal pressure being released from the body); Breath as Life (examples of whispering); From Breath to Matter (placing voice back into the body and its mechanisms – the oral cavity, muscles, the larynx, vocal cords, etc., which are often socially suppressed in their noises and expressions); and Voice as Social Space and Action (voice in the social body – creating a space or potentiality for social and political action). The chapters were supported with concrete examples of the work of selected artists, composers and performers.

The afternoon session was then focused on concrete examples that were contextualised by Rok Vevar, Irena Z. Tomažin and Jasmina Založnik. The selected illustrations were: Jerzy Grotowski’s The Constant Prince and a short excerpt from an interview with the author; Ryszard Cieslak in a video of training at Grotowski’s Laboratorium; Katalin Ladik, through an excerpt from her album Phonopoetica and a trailer for a documentary on her work; Meredith Monk’s ‘Choosing Companions’ and Turtle Dreams; Trisha Brown’s Accumulation with Talking plus Water motor; a Pina Bausch rehearsal for The Man I Love; Jerome Bel’s solo for Veronique Doisneau; and Marina Abramović’s Freeing the Voice.

The second day started with burning questions and a short reflection on the first day before shifting the focus to more practical work.

The first session was led by the artist Jule Flierl, a choreographer who works particularly with voice and who is actively engaged in the practice of combining dance and voice in search of ways for the two systems to function as one. She lead the participants through some basic voice exercises in order to open up a deeper understanding and felt sense of the topic at hand. Flierl intertwined theory with practice, sharing her experiences with participants. She pointed out the difference between the voice heard by the individual from the inside and the voice from others (representing outer space), while also providing simple and effective insights – for example that our throats are dryer if and when we are under stress than when we are not.

The dramaturg Igor Dobričić chose to open further the concept of voice by providing a historical and political perspective on the ‘currency’ of voice – or rather on a voice as a currency – and on the similarities between theatre and the political arena.

He revealed the differences between using, giving and taking voice, and talked of how voice has been made into a powerful political tool. He reflected on which voice has power (the (inner) voice of the author = the voice of authority), and on the expectation/obligation for someone to listen or to ‘pay’ attention. He also pointed out a few expressions (‘the voice of power has no face!’) and beliefs/theories (the voice is (close to) God; Althusser’s concept of ‘interpellation’) that highlight the underlying dynamics of voice.

The theatre is a vivid example of power relations, especially when you look deeply at its existing hierarchy: who can speak to whom, and how, outlines the currency of voice. Dobričić also touched on the role of the dramaturg, who in the creation process wants to be heard but does not have enough power, as they are not the author/authority, and therefore must struggle to gain a voice. In the artistic realm, we often talk about artistic voice (i.e. originality), which serves only to reinforce an individualism based on the fantasy that one should find and express one’s own innermost experience (presented as the essence of originality, where the body is taken to be a channel of authenticity). Dobričić also talked about the absence of voice, and about art as a remedy for those lacking a voice, or as a way to (re)present them. The absence of voice, or voicelessness, should not be mistaken for silence, however, as silence belongs to the sonic (when someone starts hearing the inner voice, ‘allowing silence to speak’), and calls for its own choreographic and performative sensibility.

EDN Atelier Report prepared by Jasmina Založnik, PhD, a dramaturg and dance publicist based in Ljubljana.