Taking a global perspective on civic engagement through dance, this Atelier held at CSC Bassano del Grappa provided food for thoughts and actions to shift the way we engage with audiences. Topics addressed were related to the development of long term relationships and trust, with citizens, towards contemporary dance initiatives and proposals of the dancehouses. 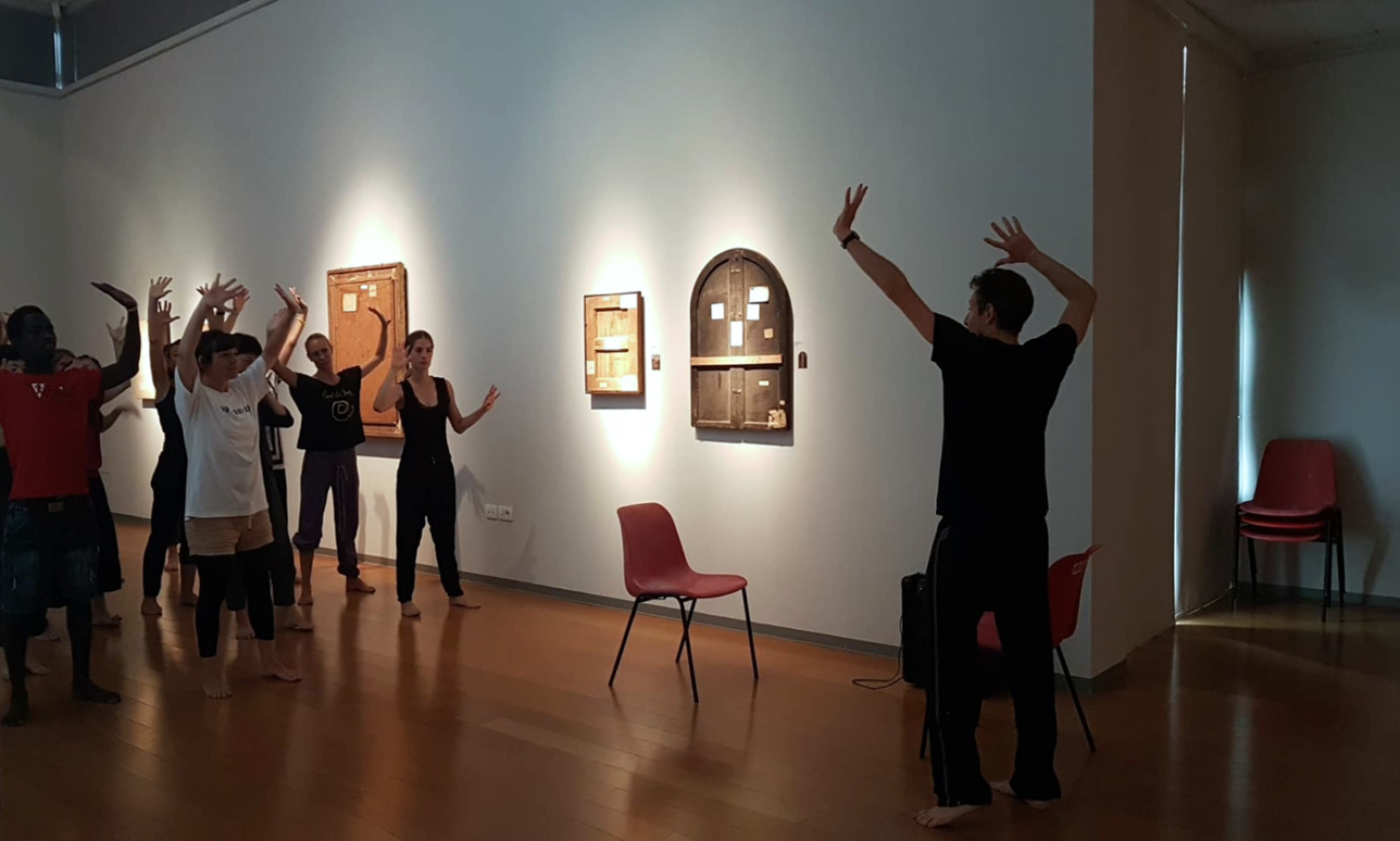 ‘I am a bud, just about to flower,
don’t crush me into this earth.
I am a bird just about to fly,
don’t cut off my wings.
I am the secret instrument of the Goddess,
don’t touch me,
you do not have the right.
My heart is free in the sky,
don’t imprison it’

This poem was written by a 12-year old Cambodian victim of child trafficking. She was forced into sex work and died of AIDS as a result. Dancer and choreographer Sangeeta Isvaran, who works in marginalised, underprivileged communities, got to know her through her work and created music for the poem. Now, she recites it in this panel about citizens and audiences. Isvaran is the kind of person that impacts the room just by her presence. She makes us dance, laugh, invites compassion, warmth and understanding, but brings the harsh cruelty of life in this space of safeness and privilege. 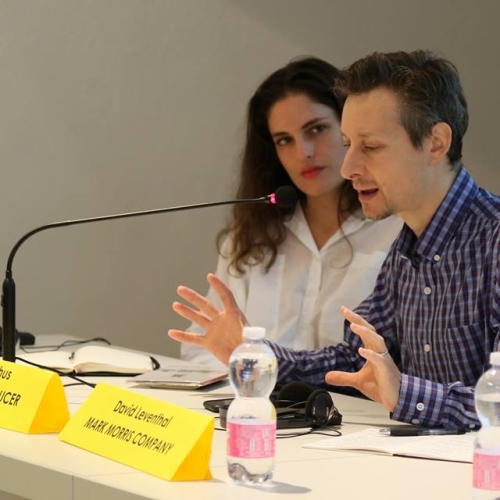 Being a community centre, creating a feeling of approachability and ownership

The participants of the panel on this second day of the Atelier share daily practice in which engagement with people in different communities is vital. The positioning of the new working space of the Mark Morris Dance Company in New York as a community centre rather than a dance centre in 2001 created a feeling of approachability and ownership. Olie Westheimer, founder and executive director of the Brooklyn Parkinson Group, saw her chance, approached them, and that was the start of the Dance for Parkinson programme that’s now running in over 500 countries (here in Bassano del Grappa under the name Dance Well). A citizen-initiated project, as director of the programme David Leventhal stresses, that made two quite divergent communities come together and support each other.

These meetings increased higher knowledge and understanding of each other. Empathy rose

Independent producer Jala Adolphus supports Indonesian artists to encounter international platforms and audiences and was strongly involved in the realisation of the works Cry Jailolo (all male) and Balabala (all female) of Eko Sypriyanto. Those performances were made with youngsters from the extremely remote village Jailolo that had been affected by a harsh religious conflict in the 90's. A whole generation lost connection to cultural sources, including the once historically embedded in their own culture. Sypriyanto kept visiting this village on an island in the north of Indonesia, worked with over 400 kids, and after two years, a piece started to appear. They dived into their own historical, cultural background and in the end two pieces were made that toured through Asia as well as through Europe.

As the local cultural politician Giovanni Cunico explains, Bassano del Grappa itself has put lots of efforts in the connection of communities. Refugees, elderly, people facing Parkinson and dancers come together in their Dance Well classes, and are made visible within the B-Motion festival - a political act that should not be underestimated in Italy of today. These meetings increased higher knowledge and understanding of each other. Empathy rose.

A capacity to connect requiring the capacity to understand your own position, priviledge, value system and definitions

Dance is a human right

This was a topic that also came up the first day of the atelier, during the panel with lecturer, researcher and teacher  Sarah Houston, shop owner and passionate ambassador for the arts Stefania Cadore, audience researcher Luisella Carnelli, dramaturge and programmer Merel Heering, artist and initiator of the Asia Network for Dance (AND+) Ana Chan and moderator Peggy Olislaegers. Houston called out for an increasing capacity to connect to the other. Among the people in the room, there seems to be an agreement of the potential value of dance, the ephemeral art that can create unforeseen worlds, can trigger your imagination and body awareness and makes you more aware of your own position and thinking process. It’s often said in the EDN ateliers: Dance is a human right. But how does this coincide with the (often unconscious) excluding mechanisms potential audience members can experience?

In line with the capacity to connect with the other is the capacity to understand your own position, priviledge, value system and definition of beauty and quality. The acknowledgement of the differences on all those layers is a key to get insight in the multiplicity of perspectives and the hierarchies behind them. An insight that opens up to a more honest and sincere conversation, and might lead to different questions: ‘how can I offer you a dance?’ as Houston proposes, ‘what, for you, are the conditions for a good conversation?’ as Heering asks her conversation partners.

It’s a shift in paradigm that is currently applied and tangible in all aspects of society, but that also creates resistance. Because it implies giving up power, stepping aside, giving space, let someone else talk, invest in listening, sharing ownership. ‘A new of finding ‘us’ instead of ‘you and me’ as Stefania Cadore proposes and  ‘creating a common ground and a space for encounter’ as Luisella Carnelli stresses. The above relate to concepts of trust, fidelity, the redefinition of spaces, communication, agency, and access. Beautiful, truthful, complex words. Where to start?

A new of finding ‘us’ instead of ‘you and me'

In the smaller working session after the panels community manager Mara Lore of dance house Lavanderia a Vapore explains how she went to key-figures of different communities in the city of Turin and asked them what the space of Lavanderia could mean to them. With her coming to the organisation, the dialogue with the surroundings became part of the DNA of Lavanderia. Taking engagement seriously means implementing the question of engagement in the whole organisation. In that sense, it’s not only an individual act, but an act of teams, of management decisions, of institutions and organizations. So the on-going conversation within institutions is as important as the conversation with the communities these institutions need to engage with.

The participants of the working sessions were asked what they would implement right away after their return. The implementation of a Dance Well class was one of the answers, rethinking my key-figures, focusing on the local community more rather than the international one, open up the institution through ‘pop-up’ actions, contract people with the paradigm shift already in their bodies and brains, re-thinking vocabulary to talk about dance, to explore strategies to expand the sense of belonging, starting the conversation with the team.

A report written by Annette van Zwoll for EDN, 2018.

Want to read more? You can access the reports that ABC Dance Blog put together about Day 1 and Day 2.