Tanzquartier Wien organised the "EDN Roadshow", an activity in order to discuss positions and developments in contemporary dance, structures, aesthetic strategies and practices of diverse cultural contexts of South-Eastern Europe. 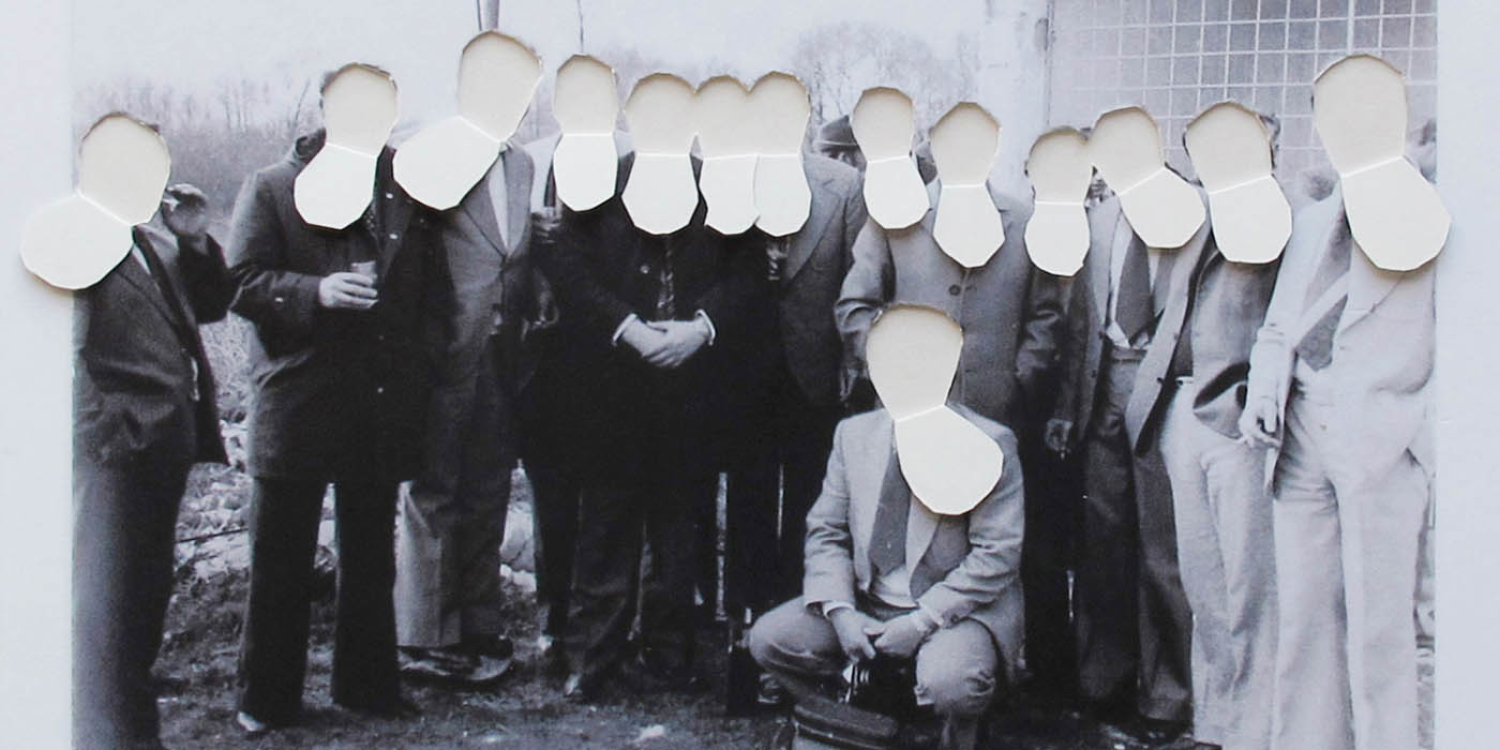 A Balkan encounter in Vienna

From the 23rd till the 25th of March, Tanzquartier Wien organised an EDN Roadshow, which offered a concise programme that offered a lot of intellectual and artistic experiences on “the Balkans” for three days. The international guests enjoyed the opportunity to discuss and “experience live” art, stories, and exchanges of artists and thinkers ideas on the various situations in the states considered as part of the Balkan and its developments in the contemporary dance scene. 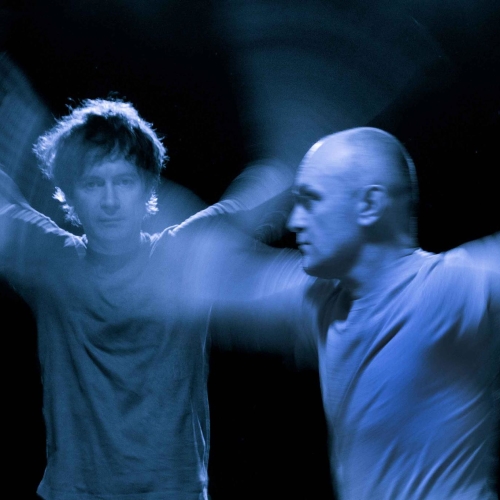 Performance and politics: a new interpretation of an old performance

On the first day a humorous yet very political start into the EDN Roadshow was given by choreographer/dancer Iztok Kovac and the director/performer Janez Janša with the re-enactment of Kovac’s solo performance How I caught a Falcon that was one of the most outstanding in Europe in 1991.

The original performance wasn’t only a break-through for Kovac, but also the moment, where the Slovenian dance scene was able to show its capability for the first time on a larger international scale. The re-enactment of Falcon was originally just a frame for their contemporary ideas about art and ageing, and a basis for their honest testimony about human limits, as well as a never-ending struggle for perfection, for the effort to keep on moving and never stop.

When Janša asked Kovac to re-perform this piece, the latter urged the performing arts theoretician and director Janša to perform with him to bring in a new dynamic, as well as a new concept of the past oeuvre. Kovac and Janša –both in their 50s– created a post-dramatic performance that humorously gave an explicit political criticism which reflected on the changing times in the Ex-Yugoslavian country providing and a lively example of the significance of Slovenian dance in Europe. This performance with the style of a “talk show” was an ideal start for the EDN Roadshow, then followed by a public discussion. 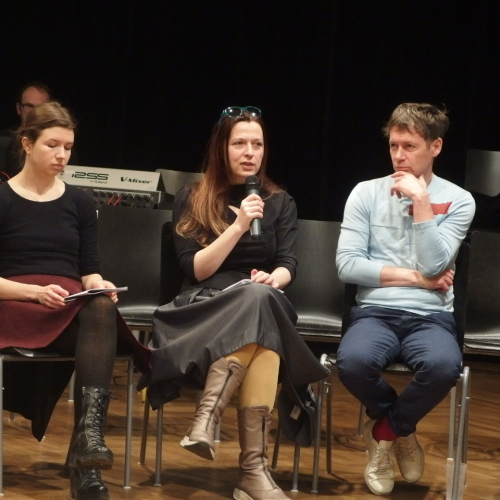 On the second day the performance 15th Extraordinary Congress: Vienna portrayed personal views and stories including female artists and theoreticians from Ex-Yugoslavia (meanwhile living in Vienna) Anamarija Batista, Jana Dolecki, Jelena Kaludjerovic, Maja Damnjanovic, Natasa Mackuljak, Vlatka Horvat, hosted by Noit Banai, professor of the faculty of cultural studies, about the complexity of historical and political developments in the Balkan states. The 4 and a half hour exchange had a dramaturgical structure with Banai exploring topics like family, school system, architecture, foreign languages, and others which gave a platform to the personal, political, and historical observations of these women. They expressed their personal stories, memories and experiences thus creating a stunning insight into the past and current realities of living in the Balkans. In this performance the women talked about the situation after the war, where families were trying intensely to establish a secure future for their children, even if that meant using unusual and illegal methods. The daily life in former Yugoslavia gained a very lively presence through those memories and imaginations.

The impact of war, resulted in the loss of relatives and friends, of belongings as well as houses that were never or not properly given back. Even nowadays, certain regions are dealing with problems of development, corrupted politicians, and a bank crisis. 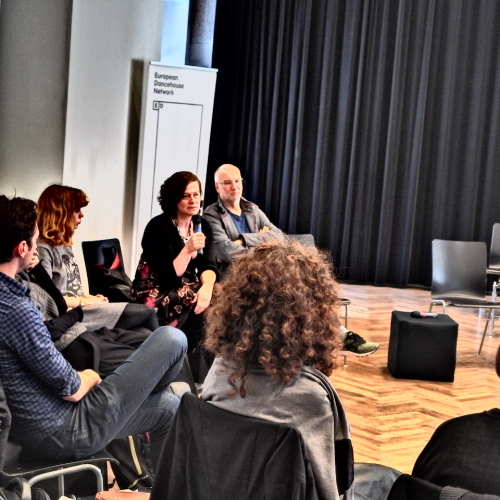 The third and last day of ENROUTE opened with a discussion round, about the current situation of contemporary dance in the Balkan region, it’s most urgent problems, and how the scene could be supported by EDN.

With guests like Patricia Apergi , Marijana Cvetkovic, Dessy Gavrilova, Vlatka Horvat, Janez Janša, Biljana Tanurovska Kjulavkovski, Euripides Laskaridis and Ani Vaseva, these topics were discussed in relation to Greece, from and with reference to the situation in Serbia, Bulgaria, Croatia, Slovenia, and Macedonia.

The artists pointed out that it would be good if performances weren’t shown in a way which stigmatised the nationality or origin of the performer, artist or choreographer – thus creating a kind of “exotism of the Balkans”. A more appropriate approach towards the artistic community in the Balkan region would be to collaborate with artists from these countries with a professional distance and with more continuous, regular support in co-producing and presenting practice.

Moreover, they explained that further institutionalisation for the mostly freelance artists would be helpful to achieve more security for them and to give them a motivation to go back to work in their country. Many artists have emigrated because they found better opportunities in foreign countries. These artists only come back for projects. Therefore it is difficult to establish contemporary scenes if many of the artistic entrepreneurs are living abroad.

Furthermore it is difficult to develop larger audiences, because ongoing co-operations are necessary for appealing to more people, and regular funding of artistic projects. In the case of Skopje in Montenegro it’s been addressed that support would be needed quite urgently. Janez Janša stressed that the Balkan’s contemporary dance scene, as well as the art scene in general there, is interesting then, if it is in a certain crisis.

The speakers wish for EDN to support their current institutions to build up a new and important scene in the former Yugoslavian countries. 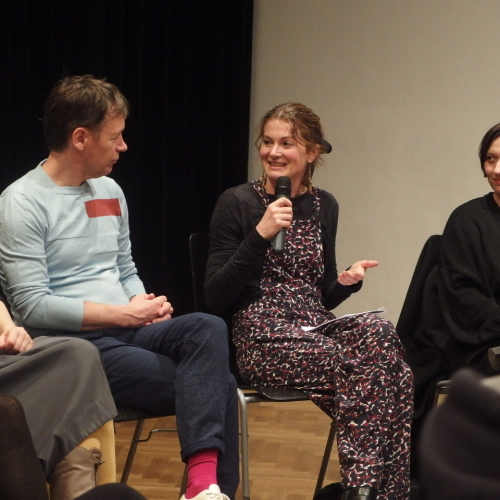 An encounter opening doors to more spaces througout the Balkans

The speakers recommended important players in the Balkans:

DNK is part of the NDK (National Palace of Culture) in Sofia – an institution which was recently privatised and is relatively free in its frames. DNK provide space and technical support for productions, which are supposed to find their own financing. To help artists and as well to be able to finance their own institution the ticket income is divided 50/50 between the artists and DNK. At DNK they normally have a rehearsal period of at least two months.

Nomad Dance Academy was initiated during a Balkan Express meeting in Belgrade when the Balkan Dance Network was established in March 2005. It is a systematic process designed to establish a strong, recognisable and unique Balkan contemporary dance scene which is also professional, socially relevant, influential, open and connected. As a platform for collaboration in contemporary dance, it is also working as a tool for promotion of contemporary dance, as well as an intense programme for education and creation. NDA is focused on improving education and research opportunities, production conditions in the field of dance and promote dance as a socially relevant art field.

The Station Service for Contemporary in Belgrad is an institution which supports the development of a contemporary dance scene in Serbia through education, production and the promotion of emerging artists, dancers and choreographers. They focus on improving the conditions of independent contemporary artists and raising visibility of academic collaborations in the field of cultural policy. The Station Service for Contemporary is also producing new works and promotes experiments, transdiciplinary work and researches.

The Red House Centre for Culture and Debate organises and presents socio-political, artistic, cultural as well as socially engaged and educational programmes. The organisation stimulates the development of the independent sector of  contemporary art in Bulgaria, provides training in less known fields and methods in arts, culture, social activities and practices in Bulgaria. It contributes pluralism in the aesthetical and organisational forms in arts and culture in Bulgaria, develops group culture and processes, through the presentation of various social topics creating an environment for adequate publicity, developing critical thinking and public speaking, stimulating the development of various communities and the dialogue between them, and stimulating politically-social debate. The Red House used to operate the same way like the DNK, though the big difference concerns the busy programme with different kind of events and short rehearsal times (about one week on stage).

Established in 1993, Maska Institute is a non-profit, non-governmental organisation for production, education, publishing and research. It is divided into three departments: Maska Productions (performances, interdisciplinary and visual artworks), Maska Publishing (Maska, Performing Arts Journal as well as books and other publications on contemporary performance and society), and Maska Symposium (an ongoing seminar about contemporary stage arts). Its activities engage in contemporary art and theory, research, experimental performing practices, interdisciplinary art, and critical theory all with a strong emphasis on international cooperation, especially throughout the entire space of Europe.

It has now a temporary dancehouse in a private estate, but CNDB has got a grant of app. 12 Mio. € to re-build a dance house in Bucharest and annual funding of 450.000 €. It would be a perfect candidate for an EDN membership, because it represents the entire Romanian contemporary dance scene. The rebuilding of the house with several studios, a library/mediatheque, and 1-2 stages could host a lot of artists that have been leaving the country and act as a hub to the international scene.

A basis for creating connections and building different kinds of relationships

The EDN Roadshow has been a huge success, in addressing all those questions. Shared experiences and interests have been the main focus of the EDN Roadshow and how structures can be developed and refined. From the perspective of the invited guests, EDN would be a great platform for future collaborations as well as for developing instruments to bring Balkan and international artists and institutions together. Through this roadshow at Tanzquartier Wien, a basis was made for creating connections and building up different kinds of relationships regarding a further collaboration of EDN and Balkan countries.

Those intense days of analysing the current situation of the Balkan contemporary dance scene, brought up many questions of how future work should or could look like: