A reflection by Maria Koliopoulou

This is a reflection by Maria Koliopoulou, Choreographer from the European Dancehouse Network Atelier, “Who am I? An exploration of how artistic identity is maintained in a nomadic life”. The two day event was held at the DanceHouse Dublin, 11-12 December and featured performances and discussions. For most contemporary dancers, sustaining their practice involves continual mobility punctuated perhaps by residencies of weeks, months, or in some very rare cases, years.

Who am I? / A reflection

Migrant bodies fill the shores of the Greek Islands.

Bodies float in the Aegean Sea. Bodies, group of bodies, children’s bodies, individuals, couples, families, relatives. On a long journey from Syria, Afghanistan, Iran, Pakistan, Somalia, Morocco, Algeria, Bangladesh. The bodies are presented. Some can enter the EU, others are denied entrance according to race or nationality? Crossing the border, continuing their journey to their new country, some bodies are marked in their arms with numbers. (From my notebook, fall 2015)

Defending the practice Ondrej Benesik, member of the Czech Parliament, said “we are not used to different races and cultures” (1).

In the last panel of the Atelier Who am I? presented by the Dance Ireland in partnership with Dublin Dance Festival and with the support of the European Dancehouse Network, professor Gerry Kearns talked about the fact that when entering France it is stated: all veils must be removed. A woman wearing a veil was recently removed from the Bastille Opera House when she didn’t take of her veil (2).

And who really cares about who we are but of what we are doing, as Su-Feh Lee commented during the Atelier.

How do we take care of each other? How do we care for the vulnerable? How can we care of each other despite race, nationality, religion. H. Arendt was amongs the first to explain how catastrophically vulnerable the figure of the refugee had become in modern times. And she insisted that most refugees were de facto also stateless (3).

Quoting Guy Cools, the displacement of the foreigner, whether immigrant, exile or expatriate obliges him or her to engage in a dialogue between aspects of his own identity (such as class, race or gender) and this anthropological identity of a nation (4).

And in this effort to displace the imagery of culture and folkways, the foreigner is engaged in a work akin to that of the modern artist (5).

The similarities between the role and experience of the artist and those of the migrant have been identified and discussed by both theoreticians and artists themselves.

How does artistic identity dialogue with geography?

In 2011 I started a research on nomadism and how an artist -like a contemporary immigrant- can literally survive in the North, South, East and West countries within Europe? What are the different situations artists work under? Which are the processes they must go through to produce a work?

Opposing the image of the continuously moving migrating body I decided to stay still. Starting from a very specific position, that of sitting in Zen meditation and equipped with a life jacket and water, the question of survival was posed. In stillness, without moving, in a position of being able to perceive everything around, to observe and being observed. The work negotiated with the public space the ability it provides to function and prosper: The potentials it promises, the dynamics and the tensions it creates through the people that inhabit it (6). 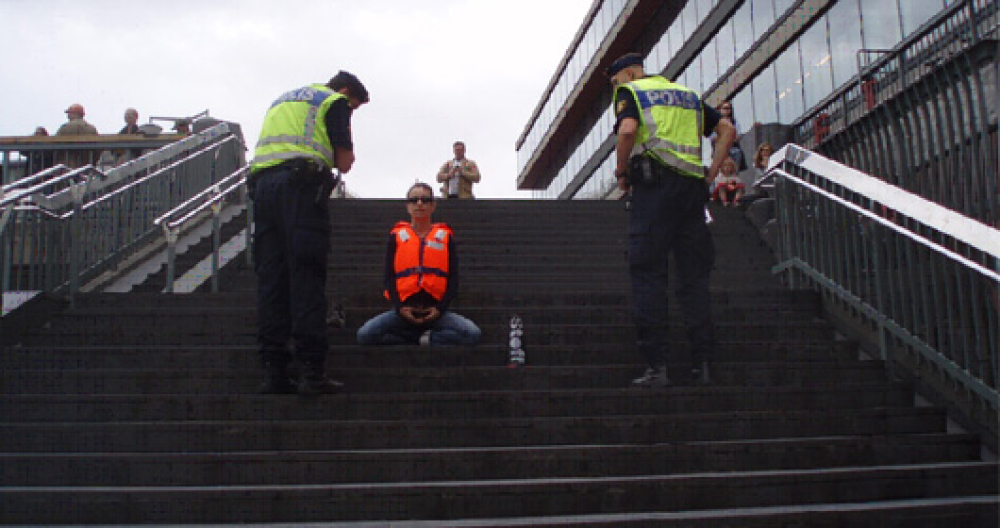 Picture: [action] 13 – on survival during the Stockholm Fringe Festival 2011 at Sergels Torg Square in Stockholm

From Athens to Kalamata to Sweden, that [action] 13 – on survival was presented, the overall presence of bodies of refugees revealed so evidently what Arendt said that we are more comfortable with the idea that refugees are people who are at least on their way to somewhere, either back home or some place else. The spectre of statelessness, a condition with no end or hope, carries with it a much greater threat (7).

To who I am as a female, performer, choreographer with immigrant roots living and working in Athens, an appeal of a “transnational” migrant knowledge of the world is most urgently needed (8) now than never.

(6)  [action] 13 – on survival is proposed as a public research act on diverse –culturally, socially and politically– squares within Europe. As such it has taken place in the city of Athens during the International Dance Day 2011. It continued its research at the choreographic laboratory 7+1, hosted by the International Kalamata Dance Festival 2011, during the Stockholm Fringe Festival 2011 at Sergels Torg Square in Stockholm and the Festival of Artistic Research (FAR) in Ottersberg 2012.