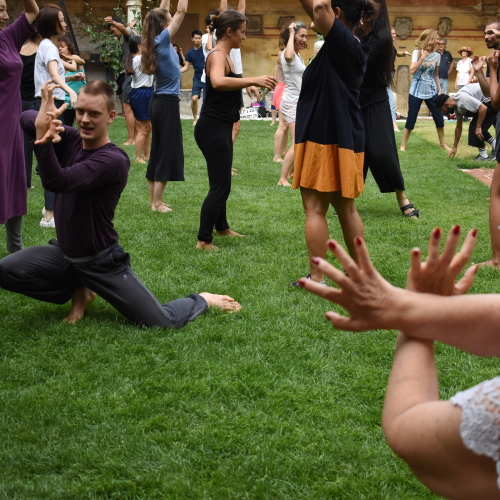 Hosting a group of artists during an international festival, under the guidance of a local mentor

The 2019 edition of B.Motion festival gathered almost 200 international participants: artists, operators, experts from the field, journalists, critics in a space conceived as a platform for dialogue and exchange. The festival presented 20 works over five days and offered a series of workshops, conferences and open debates, presentations of projects, films screening, summer schools, feedback activities, and spaces for networking.

The format of the group exchange in the Carte Blanche Artists Focus was maintained, continuing to support a stimulating environment for and amongst makers. For this edition, twelve artists from nine Dancehouses attended B.Motion under the guidance of local mentor Eva Zilio. They formed a heterogeneous group of diverse practices, ages, interests and backgrounds. The ecology of the group offered a multi-layered ground in which the makers started to get acquainted with each other, creating a space for dialogue, confrontation and interaction among themselves and open towards other B.Motion participants.

The EDN Carte Blanche took place over six inspiring, intense and enriching days, offering the participants a privileged access to the performances and the side programs they were involved in. Each day was organised in a similar way, starting with one hour of physical practice functioning as an introductory practice for the discussions that followed. The next two hours were dedicated to series of meetings aimed at developing a focus on topics and issues relevant to foster a dance language and culture in dynamic, multicultural and transnational contexts. The key theme of these meetings has been Dialogue. The meetings have been led by Peggy Olislaegers, Monica Gillette, Merel Heering and Tyrone Isaac-Stuart as facilitators in dialogue with some of the choreographers and artists involved in the programme of the festival. The afternoon (from 14h00 to 22h30) was dedicated to performances, always followed by a networking dinner late at night.

Bassano del Grappa is a small town which becomes an open stage during the festival, as many of the performances take place in site-specific locations. The participants have been involved in a process of discovering the city and the communities inhabiting it through dance, encounter of bodies and shifting of perspectives. Participants took up different roles with their presence: observers, participants, audiences, explorers, friends in a shared journey, which hopefully was just a start!

An inspiring and fulfilling experience, which contributed to the artists' personal and professional development

A rich programme for 12 artists

Read here the detailed report of Eva Zilio, mentor of the 12 participants of this EDN Carte Blanche at B.Motion.

Founder and Director I Yvona Kreuzmannová
Prague I Czech Republic

European Centre for the Arts

Founding member of the association in May 2009.